Testing is an essential component of the software life cycle, to develop efficient software which doesn’t misbehave at any point of time, you must have gone through different types of testing. To ensure the performance and behavior of software there are some important testing namely Smoke Testing, Sanity Testing, and Regression Testing, and so on. Though there are many types of testing these are some important testing done by Testers for ensuring the smoothness of developed Software. 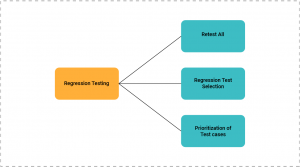 Suppose that a client wants software that allows chatting through Bluetooth on all android platforms, and the company accepts that demand and the design, as well as the test cases, are prepared.

Soon the developer started working on it after making the software the Q/A team start testing it with the help of test cases prepared and found that the end-user is not able to connect with another user through Bluetooth and reported the bug to the developer, then the developer starts to make certain changes in the source code to fix the code, now the tester will again test (Regression Testing) it from the starting to ensure the overall functionality is fine after fixing the bug. When the complete software is tested then it is ready to go live and available for the end-user.

After a certain point of time after getting some feedback the client wants that software can also be connected through WIFI and available for iOS also, the developer now rewrites the code to ensure the client requirement is fulfilled and deliver it to Q/A for testing. The Tester will perform “Regression Testing” with newly developed Test cases and also the old one for ensuring bug-free and efficient software that meets the client’s requirement and after testing regressively it will go live.

So, the above example makes it clear for you what regression testing is and why it is performed.

1) Ranorex Studio: It is the best tool for automation of desktop, web, and mobile apps having Selenium WebDriver.

Every software in the present scenario needs to be updated time to time as to survive the competition in the market, and thus updating a software requires a small or major change in the source code which may affect the overall functionality, so to ensure that the overall software works fine even after updating it we perform regression testing.

You can also read our blog on testing.

1: The Complete Process of Update Testing

2: How to Make Each Round of Testing Count?

Thank you for taking out the time to read the blog.