With the introduction of React 16.8 in 2018, React team came up with a new concept of “Hooks”. In this blog we are going to tell the reason behind creating hooks and also how to use them in a React application.

In React, we can create two types of components namely, Functional or Stateless component and the other one is Class or Stateful component.

Mostly, we create a class component when we have a requirement to maintain a state or to use life cycle methods in our component. But in reality, there is no actual class present in React which means classes in React are just syntactic sugar to provide resemblance with more popular OOPs classes and these class components will eventually convert to functional components.

But in order to achieve resemblance with OOPs classes, the classes in React has created more damage than the advantages it has to offer.

Reasons to avoid class components and creation of Hooks: –

To overcome these impediments, React team came up with a new concept called “Hooks”.

According to React Documents,

A Hook is a special function that lets you “hook into” React features.

Let’s take an example to understand how to create and use state in a functional component with the help of hooks : – 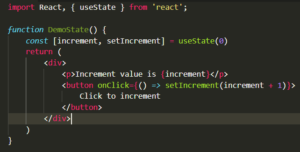 In this example, we can observe a new term called ‘useState’ that we have de-structured from the react API. This useState is a hook which helps in creating a state in a stateless or functional component.

Basically useState is a method in which we can pass argument and that argument will be treated as the default or initial value of the state variable. If we don’t pass any argument than undefined will be assigned to the state variable. Here that state variable is ‘increment’. useState method returns a pair of values: the current state and the method to update it.

Let’s take another example in which we will use useState more than once to create multiple state variables :- 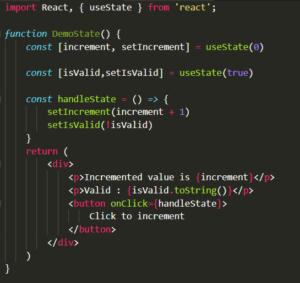 In this example, we can observe a new term useEffect that we have de-structured from the React API. This useEffect is a hook which helps in providing componentDidMount as well as componentDidUpdate life cycle method capability to this functional component. 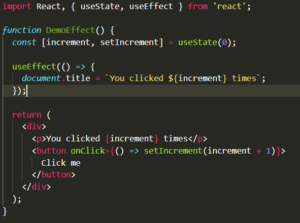 Similar to useState, we can use multiple useEffect method in a single functional component. Let’s take another example to explain that scenario : – 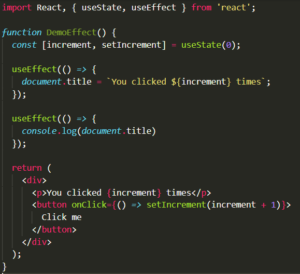 Here in this example, we are using more than one useEffect method and both will run after each render. 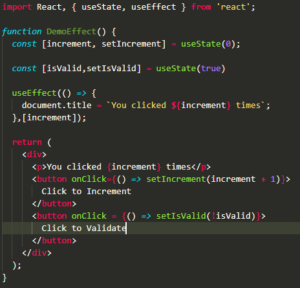 There can also be multiple arguments present in the array, if any one of the array variables value changes then useEffect will be triggered.

So from the previous examples we can conclude we are able to overcome all the impediments faced due to class components and hence in future hooks will be used in more and more React projects.

There are also many advanced hooks are present in the Hooks API such as useReducer, useCallback, useMemo etc. You can learn about in depth from the React official site which is given below :-