Before talking about lazy loading of images, I want to mention about problems / issues associated in handling images in ListView  / GridView in Android. These are:

4 Mappings are required to manage the show. I have given them names. These are

3. Process the request from the Queue.

CHECKPOINT 1 of 3 – It is possible that by the time request from the Queue is picked up for loading the image from local storage or downloading image, ListView has been scrolled by the user and ImageView object is recycled and allocated to other row with a different ID. So, we don’t need to download this image as it is not currently shown. Mapping of ImageView (IV1) and Unique ID (ID1) is checked in ImageView Recycler Map for that.

4. Load the image into Image Bitmap Cache if image is available on device local storage else downloading image. This is to be done in new thread. If mapping (See CHECKPOINT above) exists, image loading / downloading from server starts else we simply return from thread and that request to load / download is dropped.

5. If the image is available on device local storage Or it is available after downloading from server, it is put in Bitmap Cache  Map and send for display.

CHECKPOINT 2 of 3 – It is possible that by the time image is to be loaded from device local storage (Either already available OR after download), ListView has been scrolled by the user and ImageView object is recycled and allocated to other row with a different ID. Mapping of ImageView and ID is checked in ImageView Recycler Map for that. If ImageView has been recycled, we don’t need to place this image in Bitmap Cache Map. But keep it on hard disk.

I created Android library project for this and can import in Android application project. To use it you just have to instantiate an instance of ImageLoader class and call its method displayImage() from getView() method of Adapter.

1. Sequence Diagram – Accessing image from Cache and putting a request in Queue 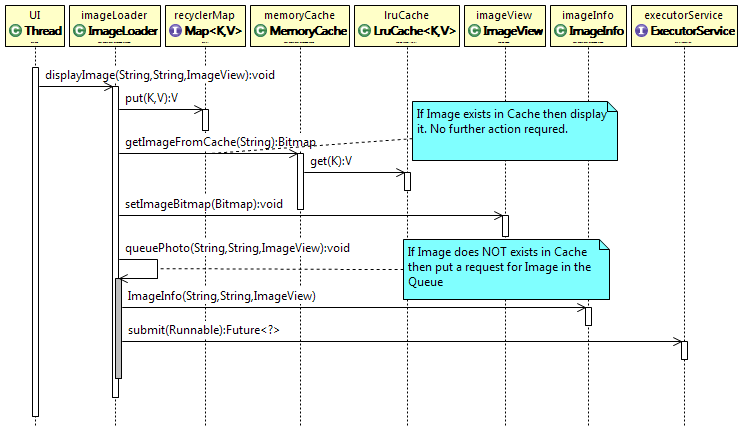 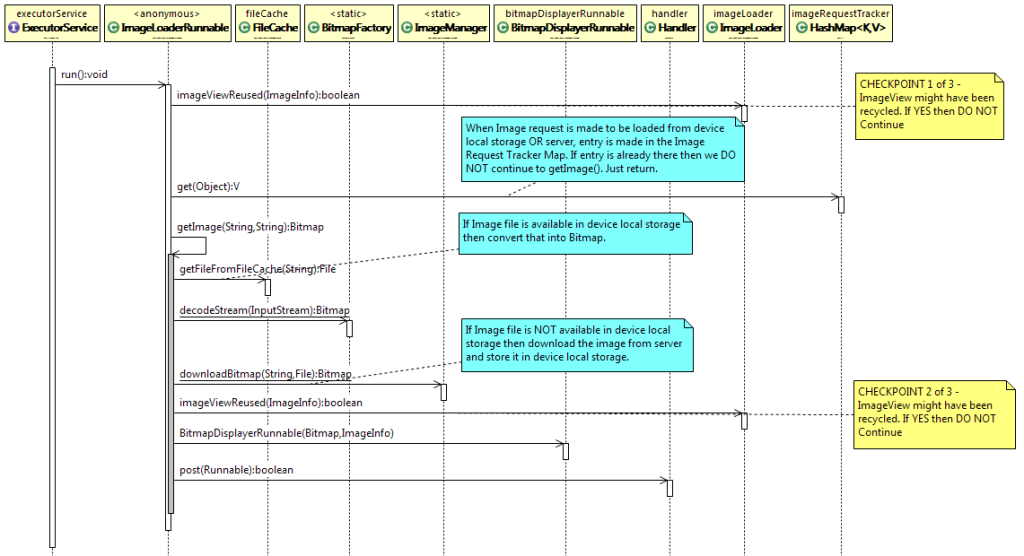